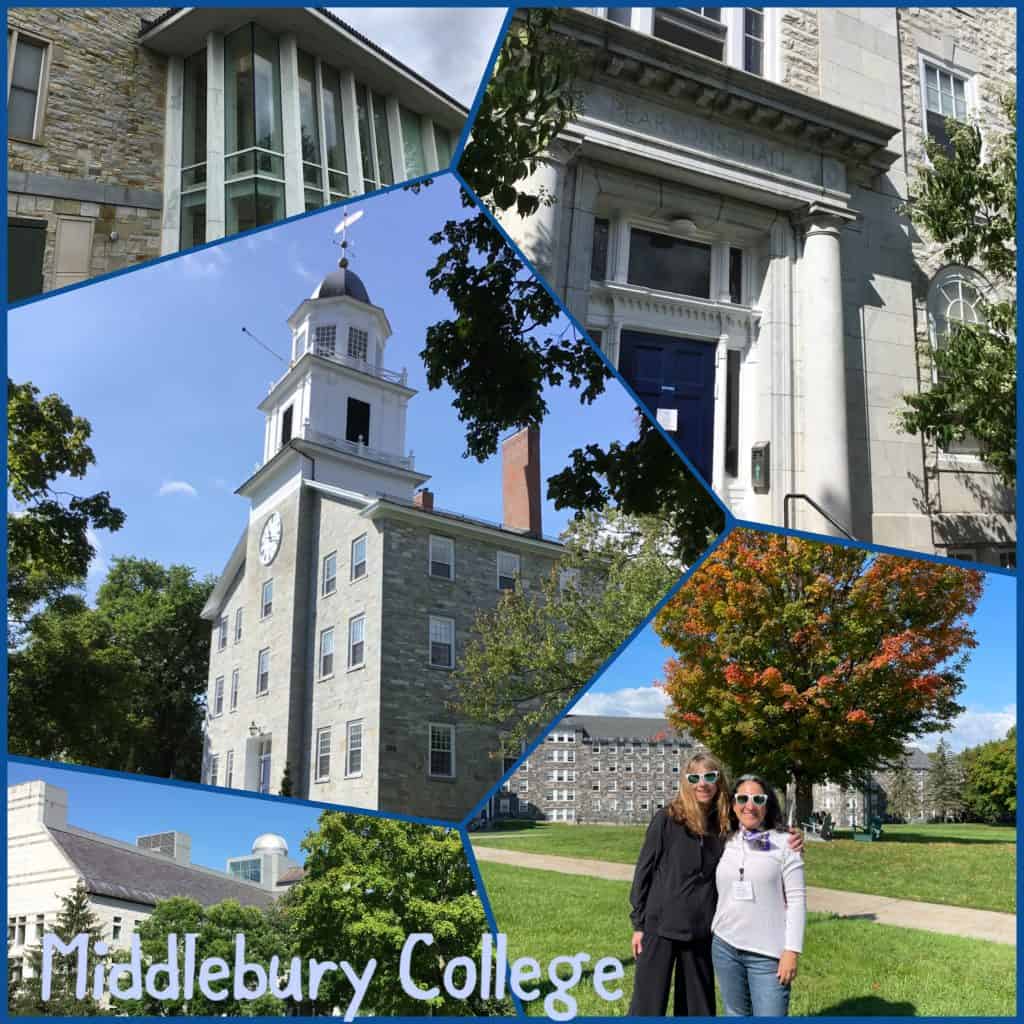 Middlebury College is a small liberal arts college in Vermont, in the town of the same name.  With 2,500 undergraduates on their sprawling 350-acre campus, Middlebury is on the larger side of small liberal arts colleges, which generally have closer to 2,000 students, sometimes fewer.  Correspondingly, Middlebury College offers 50 different majors, and has over 1400 courses in their course catalog.

So for whom is Middlebury a good fit?  Students who are progressive “early adopters,” but in a non-political way.  Middlebury was one of the first all-male liberal arts colleges in New England to go co-ed (in 1883!) ; the first African American to earn a bachelor’s degree at an American college graduated from Middlebury and Middlebury launched the first nation’s Environmental Studies program in 1965. “There’s a Vermontiness to the place,” said long time Director of Admission Sam Prouty.  Students appreciate that they’re surrounded by beauty here.  They’re invested in protecting the environment.

Academically, Middlebury celebrates the liberal arts as a way of approaching the problems of the world. “Problems don’t have a major,” Prouty said, “they are interdisciplinary.”  A third of Middlebury students are STEM, a third are arts students, and a third major in the social sciences. Because it’s a small college, STEM students do research directly with professors, as there are no graduate students competing for lab and research opportunities.   Known for teaching foreign languages, Middlebury offers 10 languages, and a classics major in which students combine the study of two ancient languages – Greek and Latin. All courses are taught immersively, even at the first level. Middlebury language students can choose to live in language specific residence halls – all residents sign a pledge promising to speak only that language while in the house.

Middlebury College  brings in a class of about 725 students each year, but about 100 of them start in February, after the January winter term.  Prospective students can opt in to this unique entry term when they apply. This subset of the incoming freshmen class, called “Febs,” receives a  specially-designed orientation program, and they stay together for all four years, graduating mid-year just as they started!  Febs are often entrepreneurial and design their own interesting fall “gap” semester before starting on campus.  Students who indicate interest in the Feb start on their application  really need to be willing to push their  college start later by one semester, because if you’re admitted as a Feb, there’s no moving to the fall start date.

Middlebury College is a beautiful campus and students here truly make the most of their environment.  Middlebury owns a ski resort about 20 minutes away, many students who come here are avid skiers.  That said – if you don’t know how to ski when you arrive here, you’ll know by the time you leave!  It’s easier to get to Middlebury than it used to be – there’s now an Amtrak station right in town!  Middlebury’s campus is literally just a few blocks walk away from the cute little town.  If you’re interested in a small liberal arts college that’s not teeny tiny, and you’re up for a rural adventure, Middlebury could be a good fit for you!

Michelle and Evelyn visited Middlebury in September, 2022.  You can scroll through all of our photos below.