Here’s what you can learn from the guidebooks about Lafayette College:  it’s a rigorous and interdisciplinary liberal arts college with an incredibly strong engineering program.  It has 23 Division I sports, including lacrosse, football, baseball, softball, and field hockey.  About half of the students study abroad, and full-semester study abroad is available to engineers, without impacting their ability to graduate on time.

Here’s what you can’t learn from the guidebooks:  students who live in Lafayette’s Kirby Hall enjoy famously delicious (if a bit on the heavy side) nachos. The 150th Lehigh – Lafayette football game in 2014 was played at Yankee Stadium.  Students can get their picture taken with one of the Marquis de Lafayette’s swords, which is kept in the rare book collection in the library, along with some coded correspondence between Lafayette and George Washington.  Kirby Hall of Civil Rights, home to the Government and Law program, was built during the Great Depression and designed by the same architect as New York City’s Grand Central Station.

Students at Lafayette are a dynamic bunch.  They are smart, involved and multi-dimensional.  Two students sat with my table of five counselors during lunch.  Alec, a senior biochem major from Massachusetts, shared his experience in doing laboratory research related to breast cancer as an undergraduate.  Rachel, a junior economics major from Northern California, chose Lafayette over acceptances from UCLA and UC Berkeley.

Another student, Jordan, toured my group around the beautiful campus. She’s a junior psych and Spanish major who spent a semester in Costa Rica studying with her psychology professor and a group of Lafayette students.  All of the students were not just happy but enthusiastic about their college decision.

According to Admissions Director Matt Hyde, Lafayette students are fearless and complex.  Lafayette puts heavy emphasis on high school grades and the rigor of classes, and while they don’t officially require an SAT writing score, they do look at them when they are sent.  They also strongly recommend a personal interview, which are offered by staff and students on campus, as well as alumni and staff on the West Coast, so that the Admissions office can get to know students well.  Demonstrating your interest in Lafayette will also improve your application. 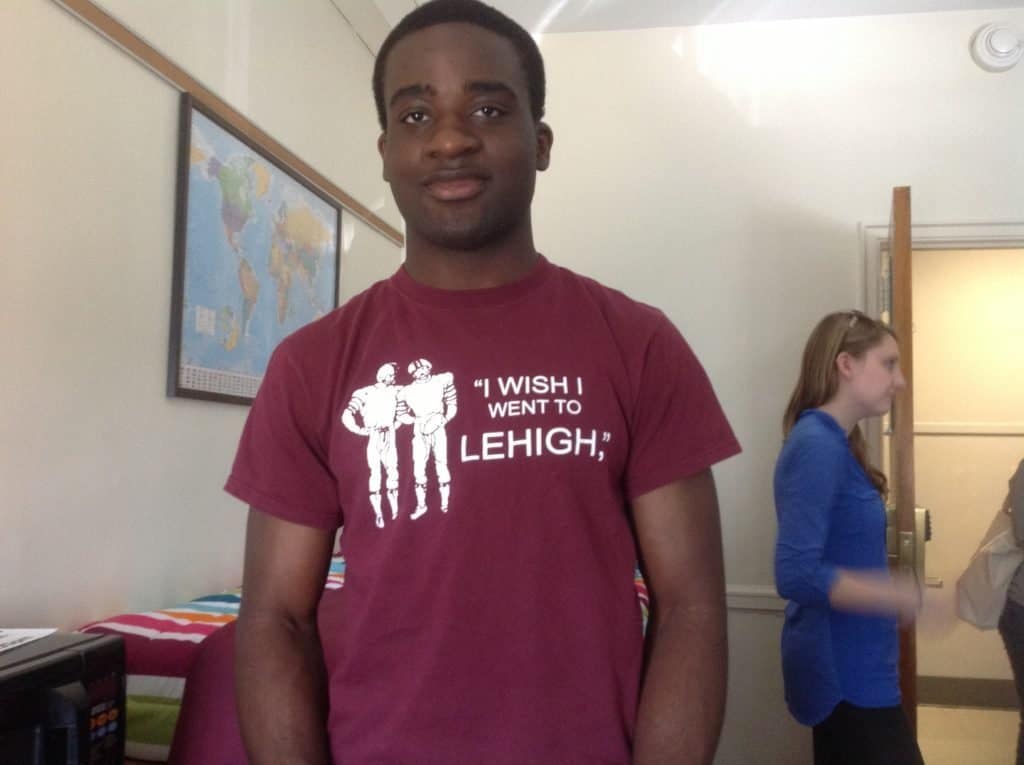 The energy I felt during my tour of Lafayette was positive and intellectually vibrant.  Students rave about activities, the social life, housing options and the food on campus.  Former British Prime Minister Tony Blair was on campus the day I visited to launch Lafayette’s Global Studies Initiative; world-renowned primatologist Jane Goodall was headed to campus later in the week, and former President Jimmy Carter would be speaking within the month.

The physical campus is beautiful, with a combination of buildings that date back to Lafayette’s founding in the early 20th century to more recent buildings like the environmentally-friendly library.  About 90% of students live on campus, most students in suite-style apartments or dorm rooms with two students.  Springtime brings cherry blossoms, irises and daffodils up so the quad was colorful, cheery and full of students soaking up the sun when I visited.

Academically, Lafayette is very strong in engineering, as well as the natural sciences, with strong pre-med and pre-law advising.  Expect to be challenged and work hard here!

Evelyn visited Lafayette in spring, 2013, and Fay visited in fall, 2018.  You can see all of the photos from their visits to Lafayette College here.