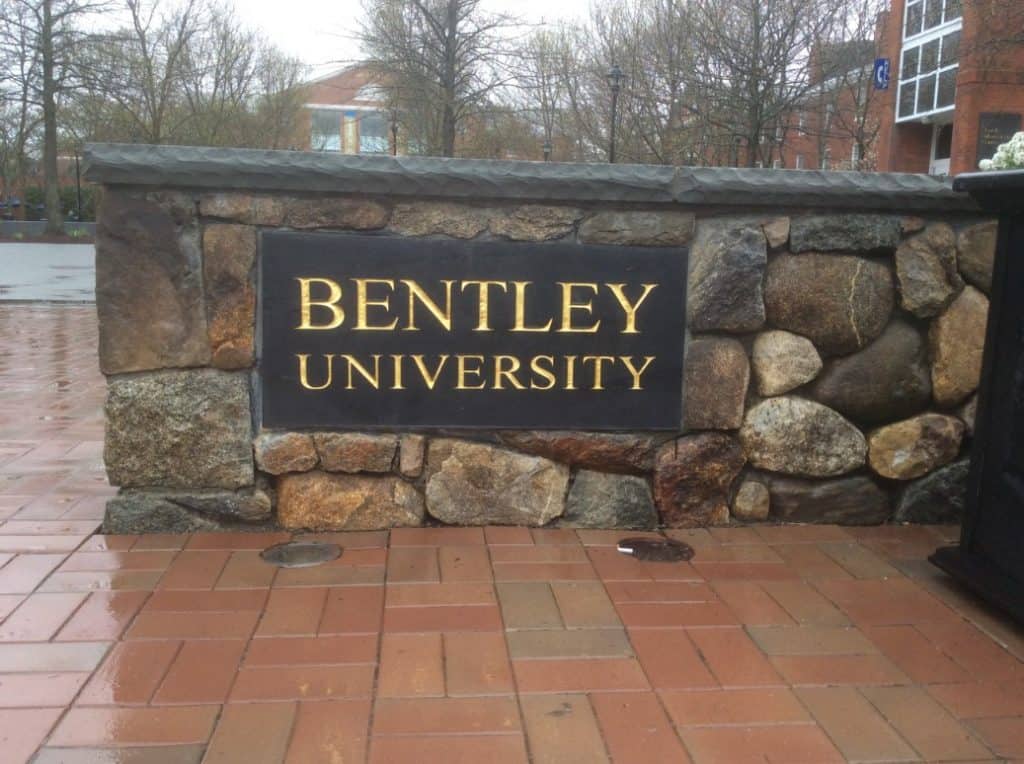 Founded in 1917 as an all-male business college, Bentley University has grown to a mid-sized co-ed university in which 60% of the 4300 undergraduates major in some type of business discipline.  Bentley students take courses in three categories:  general education requirements, the general business core, and specialized courses in their major.  Students here are not permitted to double major in two different business fields, but they can add a liberal studies major to a business degree.

There are no TAs here – all courses are taught by professors – and the average class size is between 20 and 25.  The top 10% of each entering class is invited to join the honors program, which has even smaller classes.  Honors students complete a senior capstone before graduating.

Bentley University students focus on practical training from the beginning.  After obtaining their new laptops that are included with tuition, freshmen take an IT course in which they learn how to use Microsoft Excel and HTML coding.  Students also take a course called CDI in their second semester, where they build their LinkedIn profile and learn how to write a business cover letter.  Ethics is also a strong focus here; incoming students watch a movie about the Enron financial disaster, and complete a case study on it.

Because of the strong focus on business, Bentley has one of the larger college finance trading rooms I’ve ever seen.  All finance majors become certified on Bloomberg terminals, which helps them obtain internships and jobs down the road.

Bentley and its students are very proud of the school’s #1 ranking for internships and career services – it’s said that Ernst & Young loves Bentley University students (“you can’t spell Bentley without EY,” we heard during our tour) and the Big Four accounting firms recruit on campus annually.  Nearly all students – 93% – complete an internship while they are here.

About half of students go abroad during their time at Bentley University ; some trips are short and accompanied by a professor, while others are traditional semester-long study abroad programs.  Foreign language is not required to graduate from Bentley, but languages are available here for students who are interested.

Bentley University has a broader diversity of thought than many college campuses.  “If you’re with a group of people you agree with, you don’t learn anything,” our tour guide said.  A sophomore from California who will graduate early because he came in with AP credits, he also said he found himself surrounded by ambitious classmates who have pushed him academically.

Bentley University is located in Waltham, Mass, about 20 minutes outside of Boston, and in the same town as Brandeis University.  It is very much a residential campus, with freshman all living together in three buildings, and most of the upperclassmen remaining on campus.  The campus is very well organized, with the academic quad separated from the residential halls, student center and recreation center by a large staircase and a bridge.  About 10% of students join Bentley’s various social and professional fraternities and sororities.  The University has a student programming board to plan events for weekends, as most students remain on campus.

Bentley University offers a high caliber of specialized education for students who are focused in the business fields.  Our tour guide, who grew up in Orange County, CA, made his final choice from among Bentley, Babson (another Boston-area college at which most students major in some aspect of business) and USC’s Marshall School.  Students who are interested in a suburban, East Coast college experience with a strong business focus should consider Bentley!

Our tour guide Sohan offered a little commentary on why Bentley was a great choice for him.

Betsy and Evelyn toured Bentley in April, 2017.  You can scroll through all of the photos from our Spring, 2017 visit to Bentley University below.