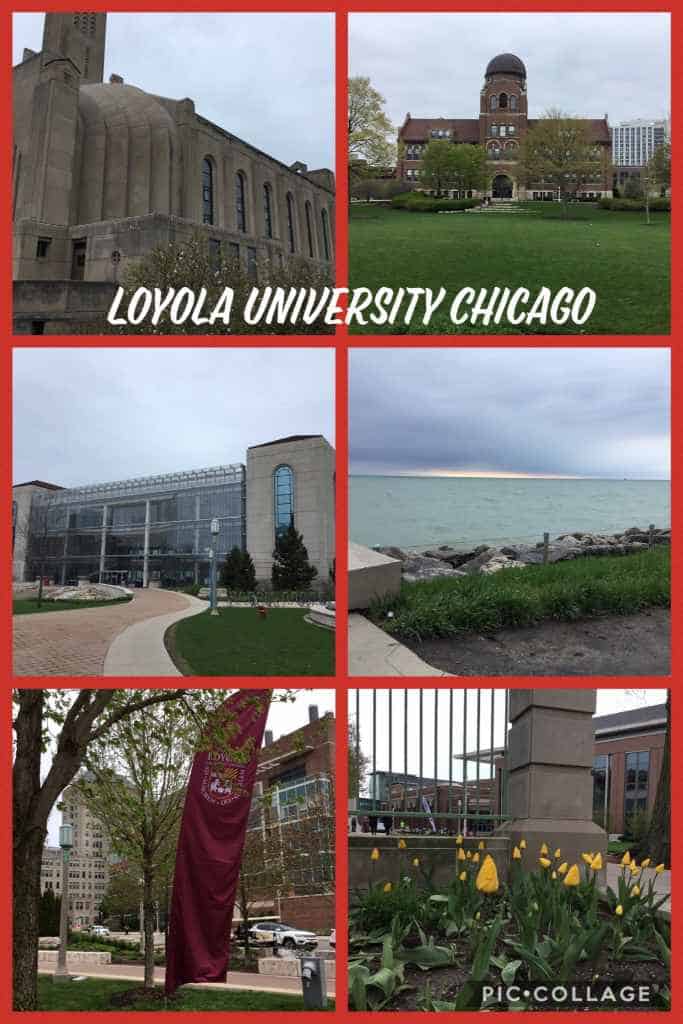 You’ll be moved by the incredible art deco-inspired architecture that fills the campus of Loyola University Chicago, and you’ll find the Lake Michigan adjacent location breathtaking.  It’s like going to college on in an art gallery on the shores of the Mediterranean!  All this, and Loyola Chicago has its own El station.  You can hop on Chicago’s elevated public transit from downtown and arrive at Loyola Chicago within 20 minutes.  The campus is a welcoming green space within the hustle and bustle of the city, so students have opportunities to get internships and jobs, while being able to retreat to the safety of a campus environment.Loyola is mid-sized, with about 10,000 undergrads and 17,000 students total – about 4,000 students call the main campus on Sheridan Road home.  It’s not the only Catholic university in Chicago (check out DePaul), but it is the only Jesuit college.  About half of Loyola’s students identify as Catholic.  Loyola University Chicago shares a name with three other Loyola universities, but they are not connected to each other (Loyola Marymount in Los Angeles, Loyola University Maryland in Baltimore, and Loyola University New Orleans).

Pre-med, science and business are the most popular majors here; Loyola University Chicago offers 80 different majors in 13 different colleges, including a law school and a medical school.  The Quinlan School of Business, named for former McDonald’s CEO and Loyola Chicago alumnus Michael R. Quinlan, offers a variety of undergraduate and graduate degrees, including bachelor’s degrees in entrepreneurship, international business, and sport management.

Student life is strong here; there is Greek life and school spirit is high.  You may recall Sister Jean cheering Loyola’s basketball team as they made it to the NCAA Final Four in 2018.  There are over 300 student clubs and organizations.  Students are involved in community service and all faiths are celebrated.  There is a Hillel on campus, as well as a Muslim prayer room.

Loyola University Chicago prepares its students for the workforce and its outcomes show their success.  Over 500 employers recruit on campus; over 40% of seniors in the most recent graduating class had a job before graduation and 98% of graduates were either employed or starting graduate studies within three months of graduation.

Loyola University Chicago has rolling admission; if your grades and test scores are strong, apply early!  The middle 50% of admitted students’ SAT scores are 1030-1260.  Loyola University Chicago is NOT on the Common App; they have their own online application.  Essays are optional but take the opportunity to share your story.  Loyola Chicago is also generous with merit-based financial awards.

Evelyn visited Loyola University Chicago in spring, 2019.  Kathy lives in Chicago so she’s on campus regularly!  You can scroll through our photos below.