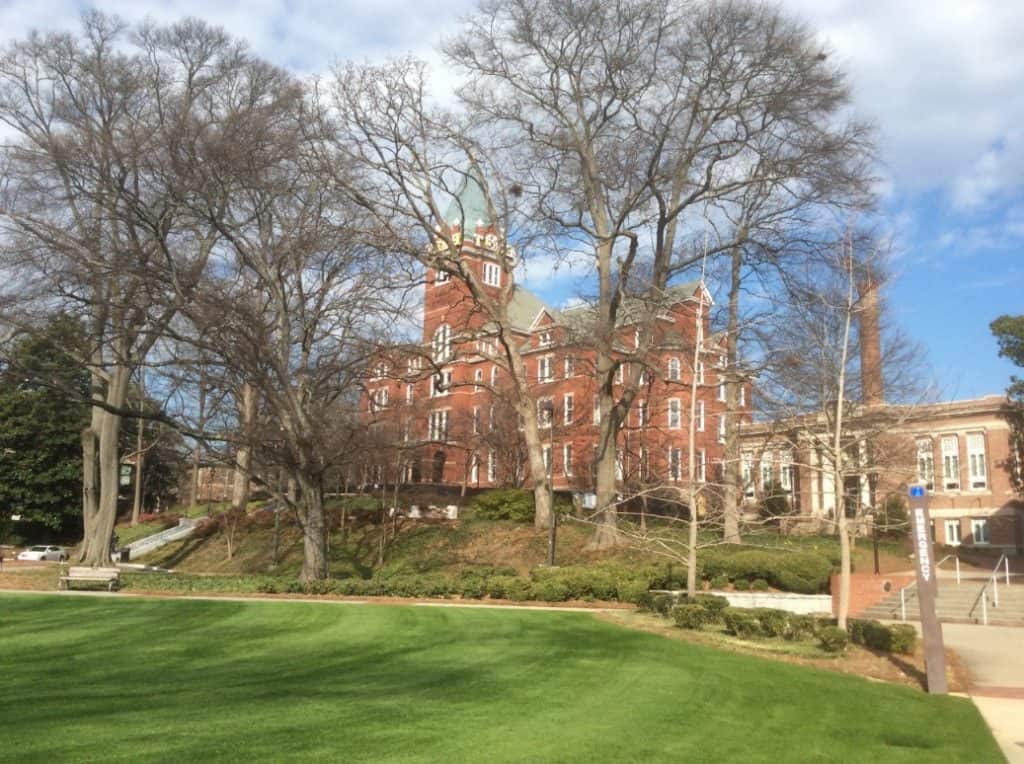 Georgia Tech is a surprisingly large and urban campus embedded into midtown Atlanta.  Known for its very strong engineering programs, Georgia Tech attracts students who are interested in making a difference in the world through science and technology in many different fields, including business, public policy and the health sciences.  “Our students view the world through technology-tinted glasses,” says Admissions Director Rick Clark.  Knowing Georgia Tech’s history helps you understand the university it is today.  “We were founded during Reconstruction in the South,” Clark will tell you.  “We were started in 1885 to be a place that was attempting to create what is coming next.  A certain type of mind thinks about what’s coming.  That’s a Georgia Tech student.”

Students here select their major fairly early, although it’s not difficult to change majors.  Georgia Tech has a co-op program, during which students take 6 months off and work at a real paying job, so Tech gets students involved in their major studies quickly.  Co-ops can be done anywhere in the world, although with GT’s fabulous midtown Atlanta location, an expanding tech and innovation corridor (they refer to it as the “Southerncon Valley”), it’s very easy for students to find jobs here.

Fifteen thousand undergraduates and nearly ten thousand graduate students share this campus, which has six colleges and 35 majors.  GT is not all things to all students, but they focus very sharply on the topics in which they excel.  The Innovation Studio, for example, allows students the opportunity to collaborate as they build and create technology outside of their classwork. Students here like being stretched, pushed and challenged, and will be surrounded by people who will make them better.  If you love math and

Class sizes are small – only 7% of classes have more than 100 students.  Tour guide Turner, a senior, said that the largest lecture hall holds 200 students, and “you might have four classes that large your entire time here.”

In addition to location, one of the differences between Georgia Tech and the universities it considers its peers is school spirit for their Division 1 sports teams.  Tech’s football stadium sits right in the middle of campus, waiting for game day.  Georgia Tech students have guaranteed housing for 2 years but there’s enough for everyone to stay on campus all four years.  99% of freshmen live on campus, in freshmen-only dorms.  25% of students join Greek fraternities and sororities.  There is a decent sized Jewish population at GT, with at least one historically-Jewish fraternity and a Hillel.

Keep in mind that Georgia Tech is a public university, with 60% of their student body coming from in state.  Georgia students apply very early, and GT’s Early Action deadline is October 15th.  They fill a large portion of their class in this round, with Georgia residents winning a higher rate of acceptance.  Only students who apply by this early deadline are considered for academic scholarships.  The average admitted student has taken 11 AP classes throughout high school.  Teacher and counselor recommendations are optional.  If you do have them, send them!  But “don’t rely on anyone else to tell us important stuff about you – you need to tell us your story,” says Admissions Director Clark.

You can scroll through photos from our February, 2017, visit to Georgia Tech below.