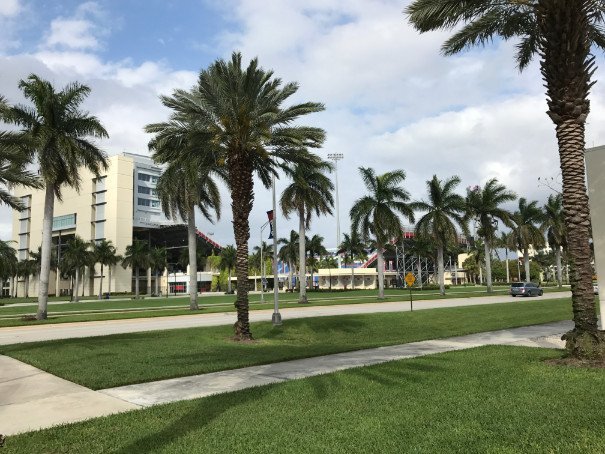 Thirty minutes south of Mar-a-Lago, 30,000 FAU Owls (25K undergrad/5K grad) trek this sprawling public university campus with beautiful banyan trees and even a notable film credit as the site of a scene in Narnia.  While I toured, construction was booming, aided by a recently-earned state grant based on having the highest job placement and starting salaries of Florida public universities.

FAU’s rolling admissions decisions are based on applicant GPAs and SAT/ACT scores.  Higher scores gain fall admission, lower scores are admitted, but may have to start in summer.  If the student later earns a higher test score or has an improved GPA, they are encouraged to reapply for fall consideration.

Residence halls cater to the fun and spirited FAU community with amenities including a BBQ pit, a volleyball court, and a community kitchen.  Students are responsible for cleaning, and the guys told me there is usually a student willing to be paid to do the job.

All students, including freshmen, may have cars on campus, but students can find almost anything they need on campus.  Florida Atlantic has its own police, pharmacy, health clinic, dentist, barber shop and bank, as well as a Dunkin Donuts and Chik-fil-a, among other popular eateries.  Need a phone repair?  Skateboard rental?  That’s there, too.

General education courses are commonly held in large lecture halls like the 250 seat Office Depot Hall in the Office Depot Center for Executive Education.  Lecture classes are facilitated with “lecture capture” allowing students to view the lecture on their personal computers and grad students hold lecture reviews weekly.  Major-specific classes are generally significantly smaller, with no more than 15-22 students in a class.

Education majors are fortunate to have internship opportunities at FAU’s own K-12 schools located on the campus.  Office Depot offers a number of opportunities for students majoring in business.  My sophomore tour guide, a finance major who came to FAU with the goal of a sports management MBA, was excited about his summer gig with the Florida Marlins and ESPN.

FAU’s Education Abroad program is supported by a multitude of partnership agreements with universities in other countries. Students may exchange their spot with a student in another country for the price of their FAU tuition.

FAU is high spirit school.  My tour was led by two sophomore fraternity brothers who seemed as serious about their academics as their fun.

Fay visited FAU in 2017.  You can scroll through her photo album below.