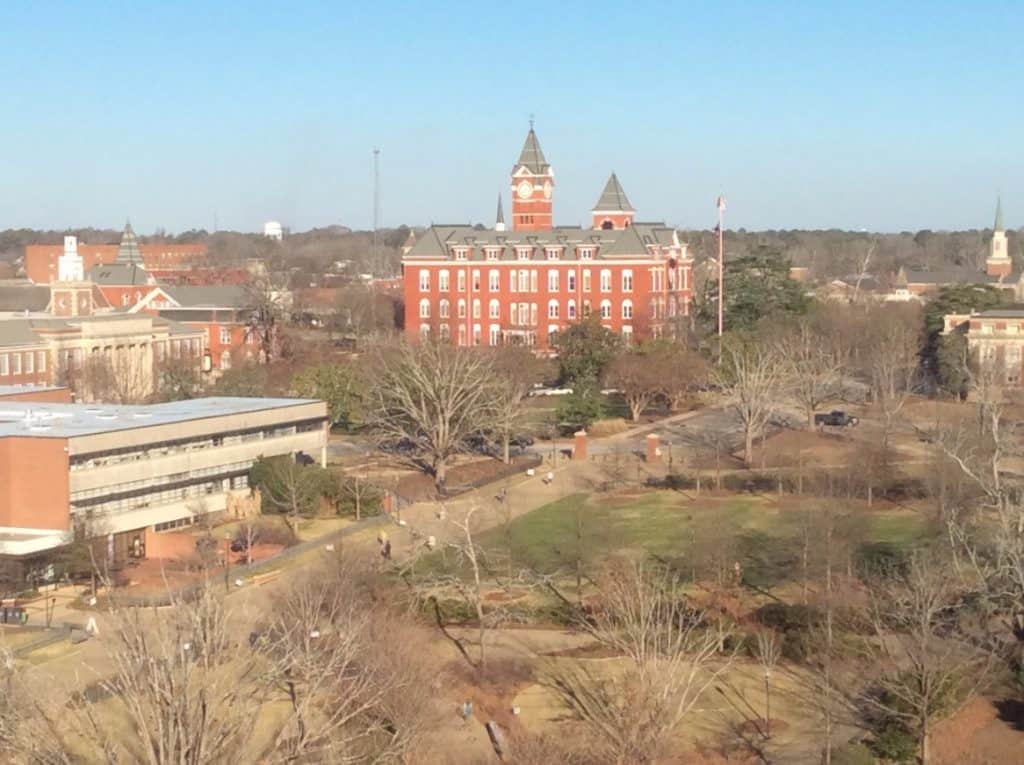 Located in the small town of Auburn, Alabama, Auburn University has strong history in the agricultural and engineering fields.  Famous for its football rivalry with the University of Alabama, Auburn also has a highly-ranked business school, as well as strong visual and performing arts options like architecture, industrial design, interior design and apparel merchandising, and and a veterinary school.  Auburn has strong advising and a great exploratory major, for students who are undecided, which focuses on helping them choose a major (from 140 options!) and stay on track to graduate in four years.

School spirit is very high on this football-culture campus, and many students help make this large school smaller by connecting with others in the several hundred on-campus student organizations.  The Greek system is active, although the sororities do not have houses, and students told us that the social life is not centered around the Greek system.  Student government is very active here.  Most freshmen live on campus but about 80% move off campus after their first year.  The town of Auburn is literally just outside the gates of the university, making it very walkable and giving it a great college town feel.

Auburn’s creed is an important part of why students come here, and why they think it’s a special place.  It was written in 1943 by George Petrie, Auburn’s first football coach, and encapsulates the history, tradition and passion that many students strive to live by.  Many Auburn students, in fact, can recite sections of the Creed – or all of it – and are eager to share how they identify with its message.  Here’s student named Christian talking about how the Creed is part of the Auburn Experience:

Students greet each other while walking across campus by saying and responding “War Eagle!”  It works for hello, goodbye, how are things, and a multitude of other things.

Auburn is well-known for being more politically conservative than most colleges campuses.  About 60% of Auburn students are from in-state, and students from Georgia, Florida, Tennessee and Texas make up a large part of the out-of-state contingent.  But Auburn students come from all 50 states and represent tremendous diversity.

Auburn has its own application – they do not accept the Common Application – but it’s very straightforward.  They consider each applicant’s weighted GPA, and the middle 50% of their admitted class has between 3.4 and 3.9.  The middle 50% of test scores are 1150-1320 SAT, 24-30 ACT.  Generous scholarships are not awarded automatically – you will receive an e-mail with a link to the scholarship application when you are admitted – and there is a firm 3.5 weighted GPA minimum for Auburn’s scholarships.  Auburn has rolling admission, so you should apply early and get your decision quickly!

Evelyn visited Auburn in January, 2016, and you can scroll through her photo album below.
WAR EAGLE!