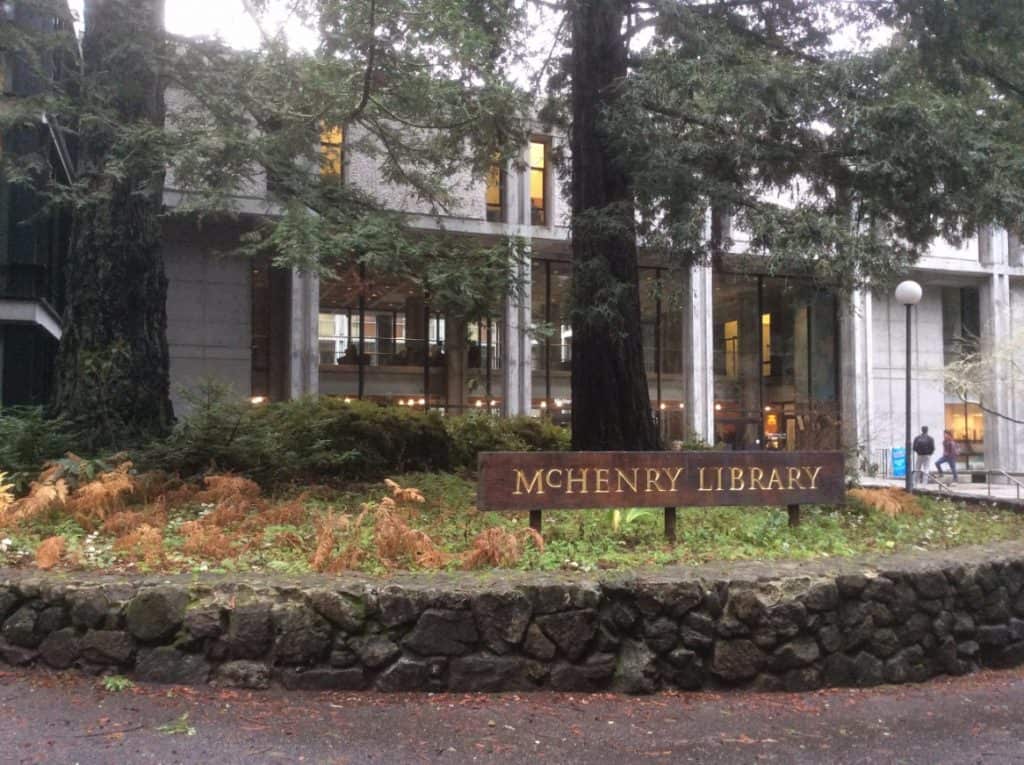 It’s not an exaggeration to say that being at UC Santa Cruz feels a bit like being at summer camp.  Nestled between the mountains and the beach, this woodsy campus, once a working ranch, is filled with eclectic architecture, wooden bridges and paths through redwood trees.  Students here call UC Santa Cruz “magical.” But it’s not really summer camp.  UC Santa Cruz is smaller than most of the rest of its peer UC campuses, which gives students here frequent opportunities for small classes (only 16% of classes have more than 100 students), close connections with professors and research (70% of undergraduates participate in some type of research while they are here).

Academically, Santa Cruz is strong in the research sciences, including biology, environmental science and astronomy.  The Institute for Marine Science, located just a few miles from the main UC Santa Cruz campus on the beach, supports a stellar marine biology program that allows undergraduates to work with scientists studying a variety of ocean-based biological issues.  Santa Cruz is one of the few UC campuses that allows undergraduates to study business through their business management economic major, and the computer science department is strong as well.  With its location close to the Silicon Valley, UCSC offers students opportunities in Robotics, computer game design, network and digital technology, and a new major called art and design allows students to design games and playable media.  Finally, Santa Cruz has strong social sciences; psychology, literature, politics, history, sociology, anthropology and community studies are among the top majors.

UC Santa Cruz organizes students into ten different residential colleges, which are scattered across the hilly, 2,000 acre campus.  It feels a little decentralized, compared to other large universities, and each college has a different core curriculum and theme.  Students live in traditional residence halls (dorms) their first year, and most 2nd year students live in apartment-style housing, both within their residential college complex.  Be forewarned – some of the dormitory bathrooms are co-ed.  Most students move off campus for their junior and senior years, but students remain affiliated with their college for all four years.

With a student body of about 16,000 undergraduates, UC Santa Cruz is the second smallest of the nine undergraduate UC campuses.  Known for its activist culture, UC Santa Cruz’s library is the home of the Grateful Dead’s documents (including possibly the world’s largest collection of tie-dyed t-shirts?).  But don’t let the towering redwoods and the hippie history mislead you.  Over half of first and second year general education courses have fewer than 30 students, and over 70% of the classes that students take in their junior and senior years fall into that category.  Our tour guide, a senior literature and film double major, talked about his very close relationships with professors, and planned on using those relationships to develop professional connections when he graduates.

Like the other UC undergraduate campuses, UC Santa Cruz considers applicants’ weighted GPA, test scores, extra-curricular activities and responses to the personal insight questions.  A more robust explanation of the factors considered by the UC campuses is here.  The average ACT score for UC Santa Cruz’s admitted class in 2016 was 28.

Magellan counselors Diana, Fay and Evelyn visited UC Santa Cruz in January, 2017.  Below  you can scroll through our UC Santa Cruz photo album!